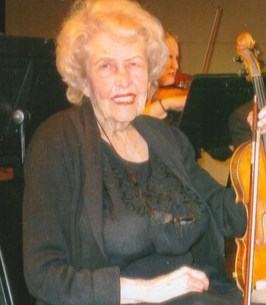 Bette P. Hopper of Fruitland passed away after a brief illness peacefully at her home June 29, 2015, surrounded by her family. Born to a fiddling farmer and a classical pianist mother on the plains of Holyoke, CO on July 21, 1921, Bette began her own musical path which culminated in being concertmistress of the Treasure Valley Symphony for several years, and along with her husband, Joe Hopper, Grand Marshalls of the parade and festivities at the Weiser National Fiddle Contest in 2013. Joe and Bette would have celebrated their 60th wedding anniversary in December.
Bette was a beloved, active member of the Treasure Valley for many years. She had her own weekly radio show in the 1950's where she played her highly expressive violin each week and showcased local talent. She and her father, F. N. Sprague, helped launch the Weiser Fiddle Contest, in which they both competed. She first competed in 1954 and was honored as Oldest Fiddler in 2014 at the age of 92. In 1950 she began her long grade-school teaching career in Fruitland, then Vale, Twin Falls, Ontario, and Nyssa while she raised 5 children and 2 grandchildren and farmed 40 acres with her husband, the amazing guitar and fiddle show-stopper who taught Ag at New Plymouth. In Vale she directed student musicals like Snow White.
As a child, Bette loved practicing the violin on the farm, even for eight hours a day when preparing for her studies at Juilliard in New York City. Her sister soloed on the piano with local symphony orchestras. Recently, Bette and Joe took time off from their apple orchard to play in the TVCC Orchestra and to give numerous concerts at retirement homes and senior centers—as many as 285 a year. Bette played several instruments in addition to the violin, such as piano, accordion, bass, guitar, and timpani drums. She was a church organist for many decades, in the Ontario, OR and Payette, ID Christian Science churches.
Bette was also active in the teacher's sorority, Delta Kappa Gamma, and in several orchestras, including the Boise Philharmonic and Treasure Valley Community Symphony, through many years. She prayed for peace in the world. She was an active Christian Scientist, and attended churches of Christ, Scientist, for many years, including of late, the Christian Science Society of Ontario, Oregon and First Church of Christ, Scientist, Payette, Idaho.
Bette leaves her husband Joseph of Fruitland, and her children Jana Jae Greif Owens, a professional musician of Tulsa, OK; Cherie Meyer Gans, a Spanish teacher and violinist of Redding, CA; Lori Jo Hopper Svrcek, a professional singer of Houston, TX; Charlotte Hopper Gilbert, a musician and entertainer of Seattle, WA; and Christopher Hopper, a lawyer of Boise, to whose sons, Caidan and Gawain, she was a second mother. In Fruitland, she also raised her granddaughters Shereen Jahanmir and Laleh McConachie, two of her 13 grandchildren and she enjoyed 14 great-grandchildren. Bette imparted to her children, grandchildren, and many music students and others, a graceful presence and a love of music, performance, and service to others through music, as well as a sense of can-do adventure in life.
Bette will be remembered with great love as a devoted wife, a nurturing mother, a heart-felt musician, a gentle teacher, a woman of grace and integrity, and a prayer-based voice of tolerance and peace in the world.
A funeral service will be held at 2 p.m., Thursday, July 2nd at the United Methodist Church, Payette. Burial will follow at Park View Cemetery, New Plymouth. Services are under the direction of Shaffer-Jensen Memory Chapel. Condolences may be made to Bette’s family at www.shaffer-jensenchapel.com.