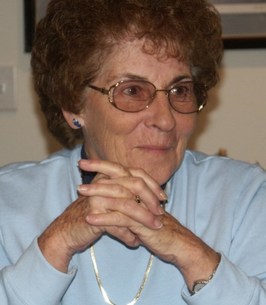 Nyla Marie Nussbaum Remington, born August 14, 1933 in Rupert, Idaho to Walter and Dolly Nussbaum, passed away on November 4, 2015 at home with her family. Nyla was raised and educated with her brother and 3 sisters in Minidoka and Rupert, Idaho. In 1951 she married Gerald Browne in Rupert, Idaho, giving birth to their first 3 children (Miles, Bud & Sherry). 1956 brought a move to Ontario, Oregon where Jerry began his driving career at Ore-Ida Foods. While in Ontario, Nyla gave birth to daughters Amber and Stephanie, and began many lifelong friendships. 1959 brought a move to Pocatello, Idaho where Jerry drove for Garrett Freight Lines, returning to Ontario and Ore-Ida Foods in 1961. Nyla, Jerry and the 5 children moved across the river to Fruitland in 1962. Fruitland became Nyla's home - attending cultural and athletic events where her children and grandchildren participated became the norm. She seldom missed a Fruitland Fair parade. In the early 60's Nyla began working for the Sugai family at Eastside Cafe where she flourished, making new friends on a daily basis. In October, 2015, she was able to reunite with former Eastside coworkers while having dinner with her family at Orphan Annie's in Caldwell. She was extremely grateful for the time she was able to spend with old friends. In 1966 Nyla married Lonny Carman and in 1968 gave birth to Trina (TJ). Along with fishing, hunting and a lot of gin rummy, they enjoyed traveling with friends regularly to Jackpot, the Oregon Coast and Arizona. In 1980, Nyla married Keith Remington and began spending time in Sumpter, Oregon where they operated Sumpter Supply. Again she made many new friends, including Keith's children Mike & Marsha, and found herself immensely enjoying the area and its longtime residents.
In 1999 Nyla reunited with Lonny Carman and they have been inseparable since that time. Nyla loved spending time in the Idaho Mountains, the Oregon Coast and winters in Arizona, but her priority was always to spend time with her children, grandchildren, siblings and their extended families. She loved each and every one of them all. Christmas, Thanksgiving, Mother's Day and the August campout gatherings were all very special to her. The August campout potluck dinner this year included nearly 50 of her family and friends - it is always a special time for her.

Nyla’s family would like to thank Heart ‘n Home Hospice for their wonderful care they provided. Nyla was preceded in death by her parents, Walt and Dolly; her grandson, Ricky Bonds; sister, Kathleen Hawkins; great granddaughter, Brittney Chlarson; and longtime friend Babe Mosso. She is survived by her loving companion, Lonny Carman; sons, Miles Browne (Kasheila) & Bud Browne (Theresa); daughters Sheryl Bruce, Amber Grosdidier (Gail), Stephanie Browne and Trina (TJ) Goade (Kevin); 15 Grandchildren; 21 Great Grandchildren; 1 Great-Great Grandchild; siblings, Barbara Stennett, Ronald Nussbaum and Jenna Vee McAlister (Granville) and many nieces and nephews.
Memorials may be made in Nyla’s memory to the charity of the donor’s choice care of, Shaffer-Jensen Memory Chapel, PO Box 730, Payette, Idaho 83661.
The family will greet friends and family at a celebration of her life; Friday, November 13, 2 PM at the Ontario First Church of the Nazarene, 1131 Alameda Drive, Ontario, Oregon 97914. Condolences may be made to Nyla’s family at www.shaffer-jensenchapel.com. Nyla expressed a desire to be buried in the New Plymouth cemetery and the family will do so at a date not yet determined.