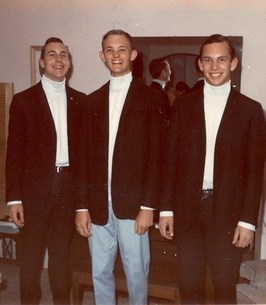 Paul Edward “Skip” Bicknese, 69, of Fruitland, passed away Monday, July 18, 2016 at home.
The first son of Ed and Ruth (Johnson) Bicknese, Skip was born March 6, 1947, and raised in Ontario. He attended Ontario schools, graduating from Ontario High School in 1965. He went on to receive his associate’s degree from Treasure Valley Community College, a Bachelor of Arts from Boise State College in 1970, and his Master’s Degree from the University of Idaho in 1972.
He served in the National Guard, playing with the 25th Army Band, from Dec. 4, 1968, until Sept. 15, 1976 and was honorably discharged with the rank of staff sergeant. He married Carol Lynn Jennings on July 22, 1969 in Winnemucca, NV. They would have celebrated their 47th wedding anniversary on Friday. To this union came two sons, Michael Edward Bicknese, on July 13, 1971, and Paul William Bicknese on Oct. 14, 1974. The family lived in Middleton, ID, from 1970 to 1972 and then in Fruitland from 1972 to present.
Skip taught music for the Middleton School District for two years then taught for the Fruitland School District from 1972 to 1987. He taught for one year at San Dimas, CA, before returning to Idaho where he taught for the Weiser School District from 1988 to 1990 and at the Fruitland School District from 1990 to 1995.Skip continued his teaching career at the Ontario School District from 1995 until his retirement in 2012, but he never stopped teaching music. He continued working with students across the valley through the end of the 2015-16 school year.
Music was engrained in everything Skip did. He played in several bands including the Tijuana Grass, Sail, Place Your Marker, The Senior Citizens and various other dance bands. He formed Ed’s Big Band, a music ensemble made up for area music educators.
Skip is survived by his wife, Carol of Fruitland; sons Mike (Tricia) Bicknese of Caldwell, ID and Paul (Tiffinae) Bicknese of Fruitland; one brother Larry (Suzy) Bicknese of Portland, OR; and grandchildren Jonas, Shaylee, and Avery Bicknese, all of Fruitland.
A viewing will be held from 5-7 p.m., Friday, July 22nd at Shaffer-Jensen Memory Chapel, Fruitland. A funeral service will be held at 10 a.m., Saturday, July 23rd at Calvary Chapel, 1775 Alameda Dr., Ontario. Interment will follow at Park View Cemetery, New Plymouth.
Memorials may be made to the Ontario High School Music Dept. or the Fruitland High School Music Dept., c/o Shaffer-Jensen Memory Chapel, P.O. Box 730, Payette, ID 83661.