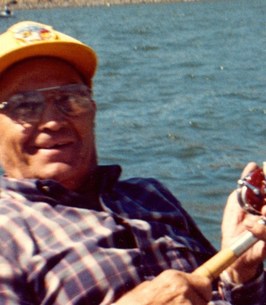 W.O. “Vinnie” Baer, 93, of Fruitland, passed away Friday, June 26, 2015. A Funeral Mass with Military Honors will be held at 10:30 a.m., Thursday, July 2nd at Corpus Christi Catholic Church, Fruitland with Fr. Calvin Blankinship officiating. Cremation and services are under the direction of Shaffer-Jensen Memory Chapel, Fruitland. Condolences may be made to Vinnie’s family at www.shaffer-jensenchapel.com.
Vinnie was born in Payette, ID on Aug. 14, 1921, son of Ferdinand and Leondina (Oster) Baer. He was raised on the family farm and graduated from Payette High School in 1940; he lettered in football, basketball and track. Vinnie went to work mercury mines in June 1940. In April 1942 he joined the Construction Battalion (Seabees) serving in the South Pacific Theatre for the duration of WW2; honorably discharged Oct. 24, 1945.
On March 11, 1944 he married Frances S. Ward. He began his career as an Ironworker in Feb. 1946 in Portland, OR. They had a son, Steven, in Aug. 1948. He taught Ironworker Apprentice School also. Vinnie retired in 1983. Frances passed away in Dec. 1985; they were married for 41 years. Shortly after moving to Fruitland, ID he married Donna Field in Aug. 1987 and added Donna’s daughter, Tennie, to his family. Donna passed away in April 2010; they were married for 22 years.
Vinnie was a life member in the Portland Masonic Lodge 141, Forman Ironworker for Local 29, and he was active in Al Kader Shrine Patrol until 1987. After moving to Fruitland he was active in Al Korah Shrine as a clown. He enjoyed the outdoors, fishing and hunting.
Vinnie is survived by he son Steven Baer (Sandi); daughter Tennie Wininger (Kevin); granddaughters Haylee Wininger and Shaylyn Wininger; and one brother Harold Baer.
To honor Vinnie’s memory, memorials may be made to the Snake River Shriners, c/o Shaffer-Jensen Memory Chapel, P.O. Box 730, Payette, ID 83661.